EUROPEAN WINTER TYRE REGULATIONS What you need to know! 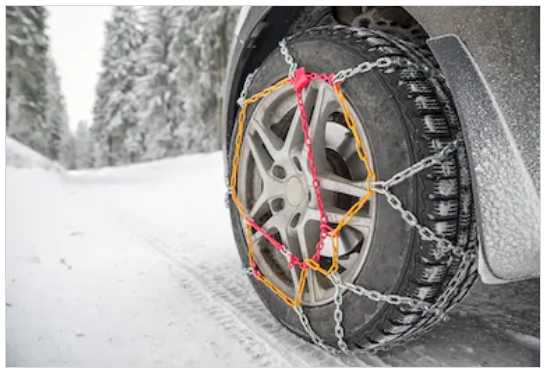 If you're heading across Europe on a skiing trip, expect snow-covered or icy roads more challenging than anything you’d normally see at home.

For your safety, fitting winter tyres and carrying snow chains makes sense whether they’re compulsory or not. Check our compulsory equipment chart and read our general touring tips too.

Check tyre condition, pressure and tread depth before any long journey. If winter tyres are fitted, the minimum tread depth is usually 3mm (4mm in Czech Republic). Even if you don’t have winter tyres, we still recommend at least 3mm of tread in the winter even though the legal minimum is only 1.6mm. 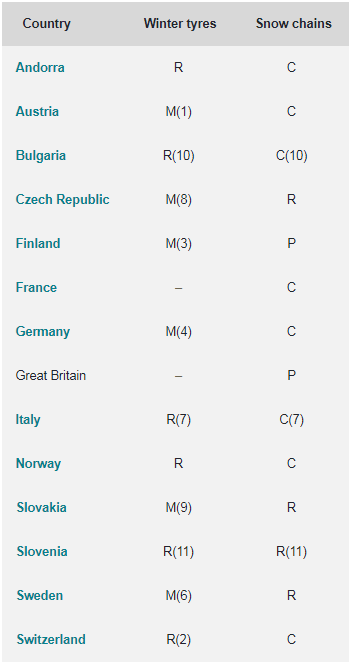 EUROPEAN DESTINATIONS AND THEIR REGULATIONS AS @ OCTOBER 2019

C = Carry chains and use as required by local signs or conditions. Reduced speed limits may apply.

Winter tyre and snow chain rules can differ for residents and visitors. The rules in the table cover visitors’ vehicles weighing up to 3,500kg.

Some 'M+S' (mud and snow) tyres sold in the UK are summer tyres which wouldn’t meet the requirements below, even though the sidewall marking might suggest that they do.

If you are in any doubt as to whether your tyres are roadworthy, have them checked by a reputable garage/tyre fitter or indeed by ourselves when we visit and we/they will be able to advise you.

(1) - All vehicles on snow-covered roads must have winter tyres (or all-season tyres marked M+S/mud and snow) between 1 November and 15 April, and they must use them if roads have a covering of snow, slush or ice outside these dates. Tyres must have at least 4mm of tread.

In theory, snow chains on summer tyres can be used where the whole road is covered with snow but in practice, as conditions can’t be predicted, winter tyres are effectively compulsory.

(2) –Snow tyres aren’t compulsory but you could be fined if you hold up traffic and your vehicle’s not equipped for snow.

(3) – Between 1 December and the end of February (but in practice from November to April) unless otherwise indicated by road signs. Tyres must be marked M+S on the sidewall. You may use spiked or studded tyres from 1 November to the first Monday after Easter.

(4) – All passenger cars and motorbikes including vehicles from foreign countries must be fitted with winter tyres or all season tyres on all axles when conditions are ‘wintry’. Winter tyres (or 'all season' tyres) should be marked M+S or have the snowflake symbol on the side wall.

(5) –Snow chains must be fitted on at least two drive wheels. Snow chains may only be used where there's sufficient snow covering to avoid damage to the road. You could be fined for damaging the road.

(6) – Winter tyres, marked M+S (with or without spikes/studs), with a tread depth of at least 3mm must be used from 1 December until 31 March.

(7) – Between 15 October and 15 April or at other times if conditions dictate. Provinces can introduce local legislation to make winter tyres and snow chains compulsory.

(9) – Winter tyres marked M+S with at least 3mm tread must be used when there’s compacted snow or ice on the road.

(10) - Winter tyres are compulsory for vehicles registered in Bulgaria during wintry road conditions and are strongly recommended for visitors. Spiked tyres are forbidden. You must carry snow chains between 1 November and 1 March and use them when the relevant road sign is displayed.

(11) – You must carry snow chains between 15 November and 15 March (and at other times under winter weather conditions) unless the vehicle is fitted with four winter tyres marked M+S. Tyres must have at least 3mm tread.

* All information provided on this page comes courtesy of theaa.com

This website uses cookies to allow us to see how the site is used. The cookies cannot identify you.
If you continue to use this site we will assume that you are happy with this.
If you want to use the sites without cookies or would like to know more, you can do that here